I appreciate learning I was a finalist in the 2019 River Styx International Poetry Contest.

"Photosynthesis" in Scientists and Poets #RESIST, an anthology published by Brill.

A small poem about a small animal, up at Canary: http://canarylitmag.org/#851

"A Different Alphabet," finalist for the Auburn Witness Prize, is forthcoming in Southern Humanities Review

"Rosh Hashanah with Crow" is forthcoming from Prairie Schooner

Thanks to Asymptote! Six translations from Yiddish:https://www.asymptotejournal.com/special-feature/rajzel-zychlinsky-to-clear-shores/

"Muted" is forthcoming from the Marin Poetry Center anthology

#sardiniansunday in Poet Lore and Natural History in The Southern Review

Tar River Poetry editor Luke Whisnant for his fine essay reflecting on art and my poem "Report on the State of the World's Childen. https://aftertheart.com/2018/12/04/imagine-that-you-see-the-wretched-strangers/

Barbara Crocker for her poem: "Poem with an Embedded Line by Susan Cohen"https://www.verse-virtual.com/barbara-crooker-2018-november.html

Jabberwock Review, for nominating "They've Discovered the Spiders Can Hear Us" for a Pushcart Prize and Best New Poets.

I'm delighted to be included in two new anthologies:

America, We Call Your Name; Poems of Resistance and Resilience ("Love in a Year of Outrage") 16 Rivers Press.

Fire and Rain: Ecopoetry of California ("Golden Hills of California," "Ode to the Brown Pelican," and "Credo") Scarlet Tanager Books.

The American Journal of Poetry
My poem "The Drill"

Thank you to Richard Blanco, and to Tor House for selecting "Letter Home" as an honorable mention winner in the annual Tor House Poetry Prize. You can read the poem online:

"They've Discovered Spiders Can Hear Us" will appear in Jabberwock Review, where it was a finalist for the Editors' Prize for poetry.

Thank you, Tar River Poetry, for nominating "Report on the State of the World's Children" for a Pushcart Prize.

Thrilled to be in Know Me Here; An Anthology of Poetry by Women, edited by Katherine Hastings, along with Ellen Bass, Lucille Lang Day, Susan Kelly-DeWitt, Brenda Hillman, Jane Hirshfield, Lynne Knight, Danusha Lameris, Connie Post, Kim Shuck, and too many others to name.

Also very happy to have been accepted for 16Rivers as-yet-unnamed anthology of poems post-Trump.

"Where Will You Go When Things Get Worse"
A small contribution in the political journal, portside.org

2015 Meadowhawk Prize
A Different Wakeful Animal is out! Thank you Red Dragonfly Press.
Redactions nominated "The Golden Hills of California" for the Pushcart Prize

My second full-length manuscript, "A Different Wakeful Animal," has been chosen by Red Dragonfly Press for the 2015 David Martinson Award and will be appearing in 2016. I'm very grateful to publisher Scott King for the honor. The book also was one of three finalists for the Philip Levine Prize, a finalist for May Swenson Poetry Award, the Richard Snyder Prize from Ashland Press, the Blue Lynx Prize, and one of two finalists for the Bona Fide Books prize. It received honorable mention in the May Sarton Prize contest, was semi-finalist for the WordWorks Washington Prize, and received honorable mention in the Steel Toe Books open reading period under the title "In the Brittle Body."

Bloomsbury Anthology of Contemporary Jewish American Poetry is out, and I'm very pleased it includes two poems of mine: "Every Minute Drove It Wilder," original published in Southern Humanities Review, and "Viewing Guernica in Madrid," which first appeared in the Atlanta Review. 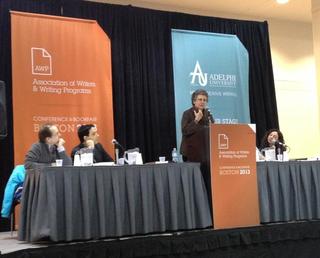 THE NEXT BEST THING

Susan Elbe's self-interview
Many thanks to poet Susan Elbe, who tagged me for “The Next Big Thing,” which asks writers to self-interview about their books with 7-8 designated questions, post somewhere online, and then tag other writers for the following week. Read Susan’s interesting self-interview on her website linked above, and mine below:

My Next Best Thing:

What is the working title of the book?

How long did it take you to write the first draft of the manuscript?

This is in progress, but so far about two very productive years, with perhaps a year to go. In any case, I refuse to spend ten years on it, as I did with Throat Singing, my first full-length book of poems.

Where did the idea come from for the book?

There’s no project, though there is at least one series of poems in here. However, I’m moving away from the primarily autobiographical and narrative (although I still do write some of those) and towards a more image-driven, occasionally surrealistic lyric. It’s a further step in my journey from journalist to trying to express the otherwise inexpressible through poetry.
When thinking about how the poems fit together, I realized almost all of them have some relationship to time: death and aging, but also how the past and future muscle their way into the present. The past is in the voices we hear, the expressions we use, the ideas we think we invented ourselves, the artistic masterpieces and historic places and ancestral stories that still speak to us. The future is in the continuing natural world. My sense of loss in this book comes from the death of parents, a nephew, and friends in recent years, but I also feel an expanding joy from my immersion in poetry and from a deepening relationship to the physical world. As I put it in “Valentine,” which originally ran in Valparaiso Poetry Review: “the earth is the body I will miss.” As I wrote in “Why Whales Are Poems,” which originally ran in the Greensboro Review: “As long as whales are, the story is larger/than us, too big for prose.”

What genre does your book fall under?

What actors would you choose to play the part of your characters in a movie rendition?

The pelicans, hawks, whales, and rocks can play themselves. My husband is okay with Robert Redford. I prefer to remain off-camera.

What's a one-sentence synopsis of your book?

Death requires us to have a serious sense of humor?

Who or what inspired you to write this book?

I’m influenced by many of the poets I read, and I’ve read many poets within the last two years. I’ve been especially interested in work from other countries: Akhmatova, Alberti, Amichai, Mandelstam, Neruda, Pessoa, Popa, Szymborska, Transtromer, Zbigniew Herbert. They’ve given me permission to court a different sort of logic and language. I’ve been influenced by all the poets I studied under at Pacific University’s low-residency MFA program but most especially Marvin Bell. Marvin’s inside my head right now shouting: Courage! Wild writing! Write with abandon! Late at night, he insists on quoting Osip Mandelstam to me, something about: you can tell when poetry has spent the night and rumpled the sheets.

What else about your book might pique the reader’s interest?

The Northern California landscape is a major character, though Portugal and Spain make cameo appearances.

Will your book be self-published or represented by an agency?

My first full-length book of poems Throat Singing, was published in 2012 by Cherry Grove Collections/Word Tech Communications. I don’t yet know which publishers will be involved in a bidding war for the next one. Poetry agents, call me! 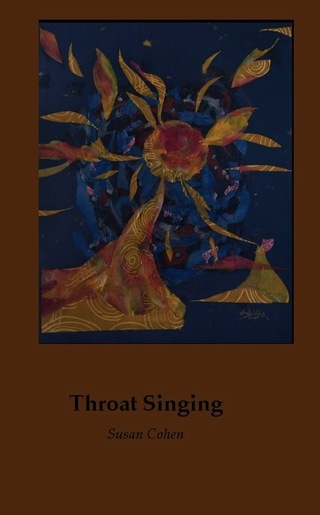 THROAT SINGING WILL BE AVAILABLE IN MARCH FROM WORD TECH/CHERRY GROVE, AMAZON, BARNES&NOBLE, AND POWELL'S

THROAT SINGING IS OUT! PLEASE KEEP AN EYE ON MY EVENTS PAGE FOR DETAILS ABOUT THAT AND OTHER READINGS IN SAN FRANCISCO, MARIN, SACRAMENTO, AND ELSEWHERE.


WHAT SOME OTHER POETS HAVE SAID ABOUT THE BOOK:

“The music of Susan Cohen's poems is close to that of Coleman Hawkins, the jazz saxophonist who ‘could make honey sting / and gravel sing.’ In poems about the world of family and the natural world, and the requirements for survival in either, Cohen writes with intelligence, clarity and deep understanding, always following the drift and pull of the feelings.” – Chana Bloch, author of Blood Honey

“Susan Cohen’s poetry is like ‘the black-eyed seal/that breaks the surface, shiny/with news of its deeper life.’ Her book, Throat Singing, is a hymn to nature, art, and history. With each page, I stepped further into the forest, the museum, on a fantastic, rhythmic journey where a ‘gray sky/is a stone any bird can enter.’ Her delight in language play is wry, surprising, mixing pathos with humor, showing us those ‘turkey vultures’ with ‘not one/existential theory passed between them.’ In a world where ‘ants swarm a sparrow’s heart,’ Cohen writes of luck, ‘that lavish, bounding luck, that doggy grin.’ We are lucky to have this book.” – Susan Browne, author of Zephyr

“Throat Singing is a collection intent on uncovering, with superb metaphor and acuity, the subtle everyday menaces and consolations of the world we live in. With a combination of artistry and investigative skill, Susan Cohen probes both life’s domestic tenderness and its restless incongruities. Rivers are ‘ferocious with silt.’ Van Gogh’s trees would ‘run if they could.’ Dogs know we’re ‘coming home to the wrong life.’ Cohen’s poems either deftly demonstrate the power of naming, or, as in ‘At the Holocaust Museum,’ find just the right narrative to acknowledge its inadequacy. Unstintingly, this book satisfies our quest for the poem that ‘surfaces, re-surfaces, and keeps glistening’.” – Jeanne Wagner, author of In the Body of Our Lives

"If You're Reading This, You Might Be a Baboon," won honorable mention in Beyond Baroque's national poetry contest and will appear on their website.

"Strata" was a finalist for the 2012 Able Muse Write Prize in poetry, and will appear in the fall issue. Other poems forthcoming in Valparaiso Poetry Review, Southern Humanities Review, anthologies, and elsewhere.

"Viewing Guernica in Madrid" and "Ode to the Brown Pelican" were 2012 Atlanta Review International Publication Prize winners, and will appear in the fall issue.

Debora Greger chose my poem "Their Voices" for the 2011 anderbo.com Poetry Prize

I am a finalist for the 2011 Nimrod Pablo Neruda Prize, and the Arts and Letters Rumi poetry prize.

I've been Broadsided!
Download a poster of my poem in response to the Japanese tsunami

NEW PAGES, which publishes online reviews of poetry journals, mentioned my poem while praising the current issue of Southern Poetry Review. I'm delighted to be in such wonderful poetic company in SPR, and thrilled to have my poem singled out for mention by poet and reviewer Sima Rabinowitz:

"One of poetry’s most useful, satisfying, and unique characteristics is the power to capture life’s small philosophical or metaphysical realities with a kind of precise, economical, focused – and uncanny – accuracy. These are the sorts of poems at which this small journal seems to excel. Poems that embody both physical and emotional immediacy. Masters of the art represented here include David Wagoner, Margaret Gibson, Carl Dennis, and Kelly Cherry, who are joined by more than two dozen others who clearly also excel in this arena.

Southern Poetry Review is not, however, dedicated only to this approach. Susan Cohen’s “Cargador de Flores,” inspired by a painting of Diego Rivera, is a family poem of considerable appeal (“It’s him! ... this man who overlooked my childhood from a print / above my parents’ bed. He’s still burdened by blossoms / piled so high they shove his sombrero down over his brows.”)..."