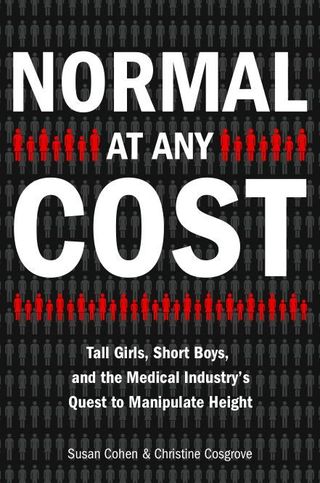 Out now from Tarcher/Penguin

Normal at Any Cost: Tall Girls Short Boys, and the Medical Industry's Quest to Manipulate Height

"Normal at Any Cost" is the story, told decade by decade, of medical attempts to tinker with one inherited characteristic: height. It reveals the way drug companies redefined normal in order to expand markets, and how the best motives and worst motives combined to result in widespread experimentation on children. We think the temptations to tamper with heredity are just beginning.

"Two science journalists examine the fascinating history of medical science's flawed attempts to manipulate height and the ethics involved. In the first section, set primarily in the 1950s and 1960s, they discuss middle-class families who were urged to try to reduce their daughters' height before it was too late for them to be 'successful adults.' The tall girls were given estrogens to send them prematurely into puberty and force their growth plates to close. In the second half, the authors focus on the use of human-growth hormone to increase the height of naturally short children. Before synthetic-growth hormone was developed, there was a painstaking procedure for extracting it from cadaver pituitary glands. This defective process led to the spread of neurological diseases as horrible as Creutzfeldt-Jakob disease (the human version of mad cow). Interestingly, neither the growth hormone nor the estrogen resulted in systematically proven results. This startling look at medical ethics and history has implications for the future of 'human improvement' therapies; recommended for large academic and public libraries." -- LIBRARY JOURNAL


"...This history is meant as a cautionary tale, and Cohen and Cosgrove raise all the right questions: when do we cross the line from treating disease to 'satisfying desires for perfection'? can the exorbitant cost of growth hormone therapy be justified in an otherwise inadequate health system? do drug companies distort the practice of medicine? does government adequately protect the public? Because it can take decades for the ill effects of treatment to emerge, this account can only raise questions about possible threats from current practices." -- PUBLISHERS WEEKLY

"Sobering story of what parents, and doctors, will do to help short and tall children become 'normal'...Through the stories of patients and scientists in the United States and abroad, the authors examine the rise of the vast growth-hormone industry, which skyrocketed in the '80s when Genentech developed a biosynthetic hormone. By the '90s, many children whose bodies produced growth hormones were receiving still more by prescription, despite the fact that the long-term safety and effectiveness of the drugs remained uncertain. Meanwhile, complications continued to surface in women who took DES years ago. The authors question the motives of all the key players—parents, doctors, drug companies—and note that there have been many more incentives to encourage treatment with hormones than to study the drugs' long-term effects. 'Once a treatment exists, its existence becomes a reason to use it,' they lament.
Solid reporting on the reckless use of medical technology for socially dubious ends."-- KIRKUS REVIEWS

"Cohen and Cosgrove pull no punches. Medical intervention into height adjustment is nothing more than a futures gamble. Physicians, pharmaceutical manufacturers, and others who should know freely admit there is no way, except in rare instances, of predicting with any degree of certainty how tall or short a child will be at full maturity. So why, then, the mad scramble by some parents to intervene, hoping that medicating their children will assure gender-appropriate stature? That’s another thing the coauthors make clear. There is a great deal of money to be made playing on the fears of moms and dads of too-tall girls and too-short boys—by recent estimates, about $50,000 per inch, without guaranteed success. Furthermore, there has been no scientific study of the long-term effects of the treatments. Some delay puberty. Some speed it up. Some may have no desired effect whatsoever. Eye-opening reading for anyone considering these interventions." -- Donna Chavez,BOOKLIST

A Cautionary Tale, March 29, 2009
By librtea- "...Initially, doctors only treated children whose hormone levels were out of normal range, yet eventually they began treating children who were healthy and developing within the norm, but whose parents wanted height adjustments for social / cultural reasons. In the Introduction, the authors note that they are not trying to "discourage a parent from taking a poorly growing son or daughter to be examined by a doctor. Growth is the primary indicator of health in a child...[but] medicine can [quickly] move from curing disease, to treating disability, to leveling disadvantage, to satisfying desires for perfection" (p. ix). Through the stories of the children, who are now adults, readers learn of the lasting physical, psychological, and emotional impact of this medical application on their lives.
Normal at any Cost is an eye-opening, thought-provoking book that provides a revealing look at the issue of height control. Meanwhile, it encourages deep consideration of the ethical issues involved. These issues are numerous and far-reaching and will become more important as medical science finds other means of manipulating our genes. Interesting and easy to follow, this book reads like a novel: One can only wish that it were." -- from Amazon.com

"A fascinating history of the medical community's manipulation of height and its effects, Normal at Any Cost asks its readers to consider the line where the extremes on the spectrum of what is normal cross over to pathology. As interesting as the individual case studies were, the overall theme of "normalcy" and its subjectivity and changeability over the years holds the book together and challenges the reader's own beliefs."
sashzj | Mar 31, 2009 | -- from librarything.com

"Medical books are bursting at the booksellers’ seams. Keith Black, a brilliant neurosurgeon, writes about his life, an inspiration from early childhood...Cohen and Cosgrove warn about the dangers of manipulating children’s height. If you want to inspire the young, have them read Black’s book. If you want them to be satisfied with who they are and what they look like, have them read Cohen and Cosgrove, which should be on everyone’s reading list."-- The Writing Doctor's Blog